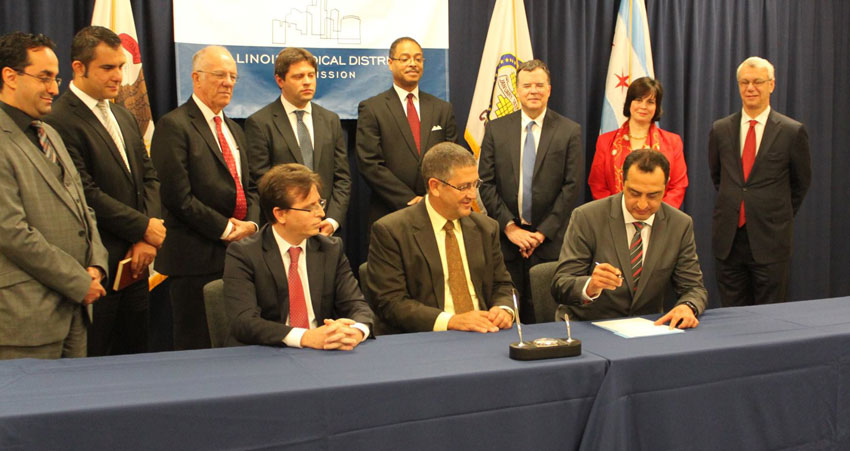 CHICAGO – The Illinois Medical District Commission (IMDC) announced today that a six-year lease agreement has been approved with Turkey-based PMS Medikal to convert a former warehouse space for its U.S. manufacturing, research and corporate offices, and eventually the company’s global headquarters.

PMS Medikal will occupy approximately 26,000 square feet in the former Buddy Products warehouse facility located on 1350 S. Leavitt, where it will employ 35 with plans for additional growth.

“Illinois is making a comeback and innovative companies like PMS Medikal are a major part of it,” Governor Pat Quinn said. “Today’s announcement demonstrates Illinois’ competitiveness in cutting-edge fields that are setting the stage for economic development in the 21st century. We welcome PMS Medikal and the new high-tech jobs it is creating in our thriving biotechnology and healthcare industry.”

“A key component of Mayor Emanuel’s Plan for Economic Growth and Jobs, which WBC is currently implementing, is to become an advanced manufacturing hub, while also fostering innovation,” said World Business Chicago (WBC) President & CEO Jeff Malehorn.“We welcome PMS Medikal and the jobs they will bring to the city.”

The Illinois Medical District is designed to foster advanced production and innovation on multiple sites in and around Austin, North Lawndale and other west side neighborhoods. ThePage | 2project has received financial support from the State of Illinois. The project’s leadership team includes Manufacturing Renaissance, City of Chicago, Cook County, Alliance for Regional Development, and the Illinois Manufacturing Lab.

Since 1997, PMS Medikal has been producing efficient, reliable and flexible solutions for health institutions and medical material producers with its wide product range. Although the company does not yet market products in the United States, it anticipates earning U.S. Food and Drug Administration (FDA) approval this month on two medical/dental device sterilization products. Operating in 69 countries on five continents and with production plants in Turkey, Germany and India, PMS Medikal is an international manufacturer of sterilization consumables and devices.

Like several other District tenants, PMS Medikal is dedicated to environmental protection and sustainability, which is evident in the design of its products. For example, one of the two PMS Medikal products pending FDA approval is a $60,000 to $70,000 device that uses non-toxic hydrogen peroxide for a wide variety of medical and dental sterilization applications.

PMS Medikal will maintain its manufacturing facilities in Turkey and abroad and plans to relocate its headquarters employees to the District later this year or early next year.

About the Illinois Medical District CommissionThe Illinois Medical District Commission (IMDC) provides service by assembling the nation’s premier concentration of healthcare facilities and providers. The IMDC fosters the economic expansion in Illinois by supporting research and development facilities, including the expansion of social service organizations that assure the health and well-being of Illinoisans with special needs; creating Illinois’ largest emergency response and disaster preparedness community; and by fostering collaboration between federal, state, county and local governmental bodies in achieving these objectives.